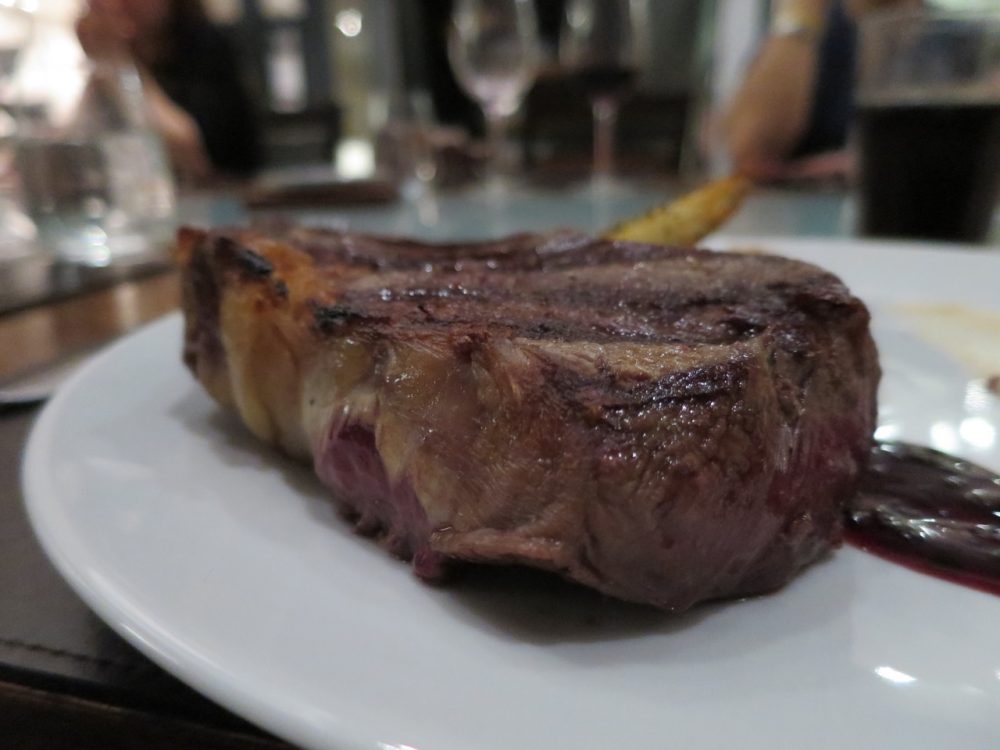 Traveling long term requires a budget conscientious mindset. Emily and I have put forth much effort to stay within budget, and I am happy to report that we’ve done pretty well so far. That said, we do like to treat ourselves occasionally. It’s what Tom Haverford and Donna Meagle would want, right? I would argue, the best way to “treat yo self” in Argentina is to enjoy some of the world’s finest steak. We researched the best steakhouses in Buenos Aires and settled on trying two: Don Julio, and Steaks by Luis, both in the Palermo district. We ate at both, and while Don Julio was very good, Steaks by Luis is worthy of its own post.

The trendy thing in BA right now is “secret” restaurants, speak-easy’s and other pseudo-public/pseudo-private dining and drinking establishments. Steaks by Luis is such an establishment. The restaurant is reservation only, and only open a few days of the week. The restaurant isn’t really a restaurant, insofar as the menu is preset, and everyone eats at the same time, and at the same table. The facility looks more like a lush apartment than a standard sit-down eatery. Steak by Luis promises five delicious courses, each paired with an Argentinian wine, in the setting of a traditional “asado.” The entire affair lasts 3.5-4.5 hours.

Argentinians eat dinner late. As in, I’m about ready for bed when most Argentinians are gearing up to go out for dinner. In my family, we ate dinner at 5:30PM every night. Emily’s family usually eats around 7-7:30PM. To me, these are typical American times for dinner. In Argentina, most restaurants don’t even open until 8PM. That’s right, the early birds for dinner eat at 8PM. At Steaks by Luis, the assado starts at 8:30PM. We walked about 10 blocks from our AirBnB to Steaks by Luis and arrived at an unmarked, nondescript apartment complex in the heart of Palermo. We rang the doorbell, and after giving our names, were buzzed in. We ascended two flights of stairs to find a gorgeous dining room area with attached kitchen, balconies overlooking the city, and a massive brick grill outside. Our fellow guests hailed from New York City, California, France, Miami, London, São Paulo, Argentina, and China. There were twenty of us seated at a long wooden table. The staff introduced themselves and we got to meet Luis himself. His biography on the restaurant’s website boasts that he’s been manning the grill as an “asador” since he was a child; learning the trade from his grandfather.

After the introductions, the festivities began with our first course: “picadas.” A variety of warm breads, toasty empanadas, and rich sliced cheeses and meats. I can’t comment on any of the paired wines, as I don’t drink, but Emily commented that the pairings were exceptionally well done throughout all five courses. The empanadas were a real treat and the staff informed me that everything is made on site.

The second course was an arugula salad with a zippy vinaigrette and thinly sliced apples. I didn’t pay much attention to the salad because I was outside bs’ing with Luis about steaks, grills, and his business. I’ll get to all that in a minute though.

The third course is Luis’ favorite, and the most adventurous for an American palate: “achuras.” These are a variety of grilled meats from a variety of animals, including pork short ribs, blood sausage, stuffed cow artery, and some other meats that I couldn’t identify. The achuras also included a grilled wheel of cheese, paired with warm chewy bread.

There was a pause between these courses as Luis prepped the main course of the night: a 12oz, 2.5″ thick slab of perfectly marbled, grass fed, “bife de chorizo” (New York Strip). Naturally I was outside at the grill with Luis when he laid them on the grill. Luis was more than happy to talk all about his process for grilling steaks: first, the cut and quality of the meat is most important. Luis sources all his steaks from a single rancher in rural Argentina. Second, the steaks are laid out at room temperature and lightly salted 3 hrs before grilling so that the steak absorbs the salt and creates its own brine. Third, the grill needs to be around 400 degrees Fahrenheit, charcoal only (sorry Hank hill). Come grilling time, Luis lays the steak down on one side for 7 minutes, flips it, and cooks for another 6 minutes. This cooks the steak to a perfect medium rare. Then the steaks rest for 5 minutes and they’re ready to eat. He really emphasized to me just flipping them once and not “fussing” with them. Luis does most everything by “feel” at the grill, except for the time. That, he says, is the one thing he uses an instrument for.

Luis and I were joined by two other guests at the grill, an American from California, and a French man. Emily joined us briefly to see where I’d wandered off to. Luis commented that it’s usually men who join him out at the grill, and the topics of conversation are generally the same three things: the meat, women, and futbol. If you’re not aware, Brazil and Argentina have a friendly(?) rivalry that’s usually expressed on the pitch. At the assado, a guest requested that her steak be “butterflied.” I asked, incredulously, who would ruin a fantastic steak like that. Without missing a beat, Luis responded, “It was a Brazilian. . . . Of course.” He appeared to be only half joking.

Finally, after 3 courses we were ready to eat the pièce de résistance:

…and it was the best steak I’ve ever eaten in my life. Argentinian steak has incredible flavor. It presents a subtle gamey taste that doesn’t overwhelm the other flavors (like venison often does.) It’s less gamey than rabbit, but more gamey than Montana beef. Honestly, it made many steaks I’ve eaten at home taste bland in comparison. Luis cooked the steak to perfection, and I could have cut it with a spoon the meat was so tender. Can you tell I was happy about the steak? Sides included roasted potatoes, and a vegetable medley purée.

Finally, we capped the evening with our fifth course: dessert. Luis’ staff makes an incredible dulce de leche cheesecake on top of a dense, buttery shortbread crust. The staff paired this little slice of indulgence with a side of homemade whipped cream topped with candied orange peels. Decadence is this dessert.

Emily and I spent a lot of money on our dinner. I’m sure the local Porteños would say we could get a good steak for a much better price elsewhere. That might be true, but we didn’t just pay for the steak, we paid for the experience. An assado is just as much about the company as it is the meat. I have to hand it to Luis and his staff, they are not only master chefs and assadors, but they are also master entertainers. We had a phenomenal time at Steaks by Luis and the experience was worth every penny. Luis and his staff made us feel comfortable, at home, and they fed us the best steak I’ve ever eaten. If you ever find yourself in Buenos Aires, an asado at Steaks by Luis is a must do. You can find their website here.

*Emily and I were in no way paid, reimbursed, or otherwise compensated for this review.