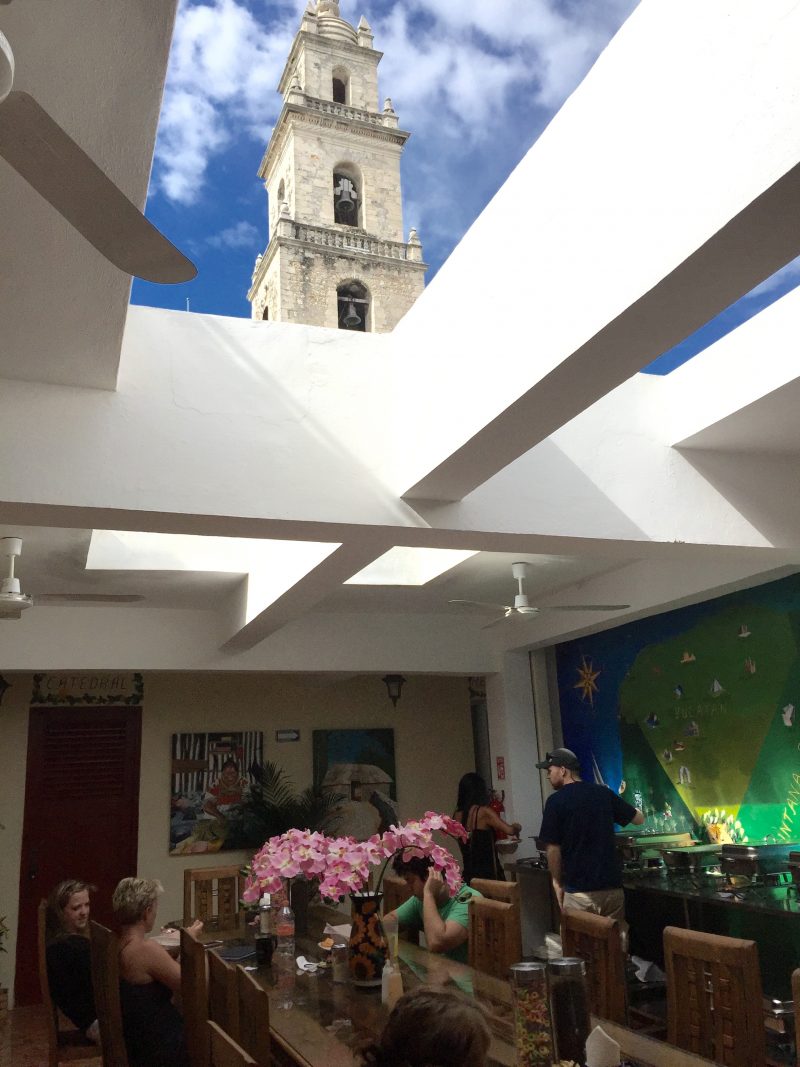 Traveling on a budget, like Em and I are, puts you in close proximity with strangers from all over the world. In Cancun, we booked a cheap hotel in a great location. The hotel provided us ample privacy, and most importantly an AC unit which we controlled. In Valladolid, Merida (and now in Lima, Peru) we stayed in a hostel. If you don’t know what a hostel is, it’s like a hotel, but you’re sharing your room with anywhere from 4-16+ people. It’s like living in the dorms all over again. Naturally, things can go either really well, or really poorly, depending on your roommates. The great advantages of hostels are twofold, 1) they are significantly less expensive than hotels, 2) it’s a great way to meet other travelers. Our hostel in Valladolid cost us $10 per person, and our hostel in Merida was around $8 per person. Meeting other travelers is a great way to get the inside scoop on places you will be visiting. Some hostels are more quiet and geared towards older travelers, and others are “party hostels,” where people get hammered and party all night. Em and I prefer the former.

We made some great friends at the hostel in Valladolid, one of whom we ended up traveling with for nearly a week. Emily met Angie at the hostel while I was wandering around in the heat trying to find an ATM. Angie is visiting Mexico from Spain. The three of us hit it off and we ended up spending nearly our entire time in Valladolid and Merida together. We visited Chichen Itza, the Cenotes, and bummed around the Yucatan together. It was a real treat to have a native Spanish speaker helping us with our broken Spanish.

On our ride into Chichen Itza, we took a “Collectivo” instead of a bus, and met Maroc, from Slovakia. He and I share a similar sense of dry humor, and we both speak really bad Spanish. We took a tour of Chichen Itza together, and went cliff jumping in the Ik-Kil Cenote. Well, Maroc and I went cliff jumping. Emily “chichen-d” out.

Maroc and Angie really enhanced our experience of the Yucatan. We’re hoping to meet up with Angie in Barcelona this fall, and Maroc in Prague this winter.

We also met some people that did not enhance our experience.The people in question were other couples from different parts of western Europe. Before I get into what made them frustrating, I’d like to share some basic hostel and traveling etiquette:

When in a hostel, DO:

Seems pretty basic right? The first afternoon in Valladolid, our roommates started filtering in. We were in an 8 bed dorm, with Angie being one of our roommates. A couple arrives and we’re making small talk. I ask where they’re from, and the girlfriend says she’s from a city in Europe I’ve visited, and quite enjoyed. I express this to her and say she has an absolutely lovely city. She stares at me like I just kicked her cat and says nothing. That evening, everyone gets to bed around 11PM, and the lights go off. There’s an ensuite bathroom in our dorm with an open wall at the top, so you can hear everything that goes on in there. At 11:30PM, the boyfriend decides to pull out an electric shaver and give his stubble a trim. Once he’s done, the girlfriend decides that this would be a good time to blow dry her hair. Going in and out of the bathroom, the two of them must have been raised in homes with bathroom doors that can only be shut by slamming them.

One of the many reasons we stayed at the hostel in Valladolid is because of the advertised A/C in the rooms. No A/C in a room in Central America is a deal breaker for Em and me. Neither of us can sleep in the heat. The A/C in our room was set to 23 degrees celsius, (73.4 degrees Fahrenheit), which was perfect. The girlfriend doesn’t understand the concept of layering yourself with additional blankets when cold, and instead opts to ask the Hostel staff to TURN OFF THE A/C ENTIRELY WITHOUT TALKING TO ANYONE ELSE. ARE YOU KIDDING ME?! I RARELY WRITE IN ALL CAPS BUT I THINK THIS SITUATION WARRANTS THE USE OF THEM. The room quickly hit at least 85 degrees with no fan running (because she turned these off too). Emily and I were catching a ride to Chichen Itza early the next morning, and neither of us slept. The following night, our oh-so-thoughtful roommate asked the Hostel staff to once again turn off the A/C. Emily couldn’t hold her tongue and (politely) requested that the A/C be left on. The front desk worker pondered for a moment and then said, “yeah, I mean, you paid for the A/C, it should be on. Is 24C ok?.” I am so grateful my wife spoke up, as we both slept super well that night. The next night, in Merida, we stayed in gender segregated dorms of 8 people, and me and the other 7 guys all decided on a temperature before bed. It certainly made for a more comfortable night, and prevented a lot of unnecessary resentment.

Hostels are a great part of traveling, but not without their drawbacks. When you have to share accommodations with strangers, there are necessarily going to be conflicting preferences when it comes to temperature and acceptable noise levels. While I’m sure I’ll have fun talking about this story in the future, our hot and humid room in Valladolid made for a pretty miserable night. We’ve since stayed in several other Hostels in the Yucatan and Peru, and they’ve all been very positive experiences.