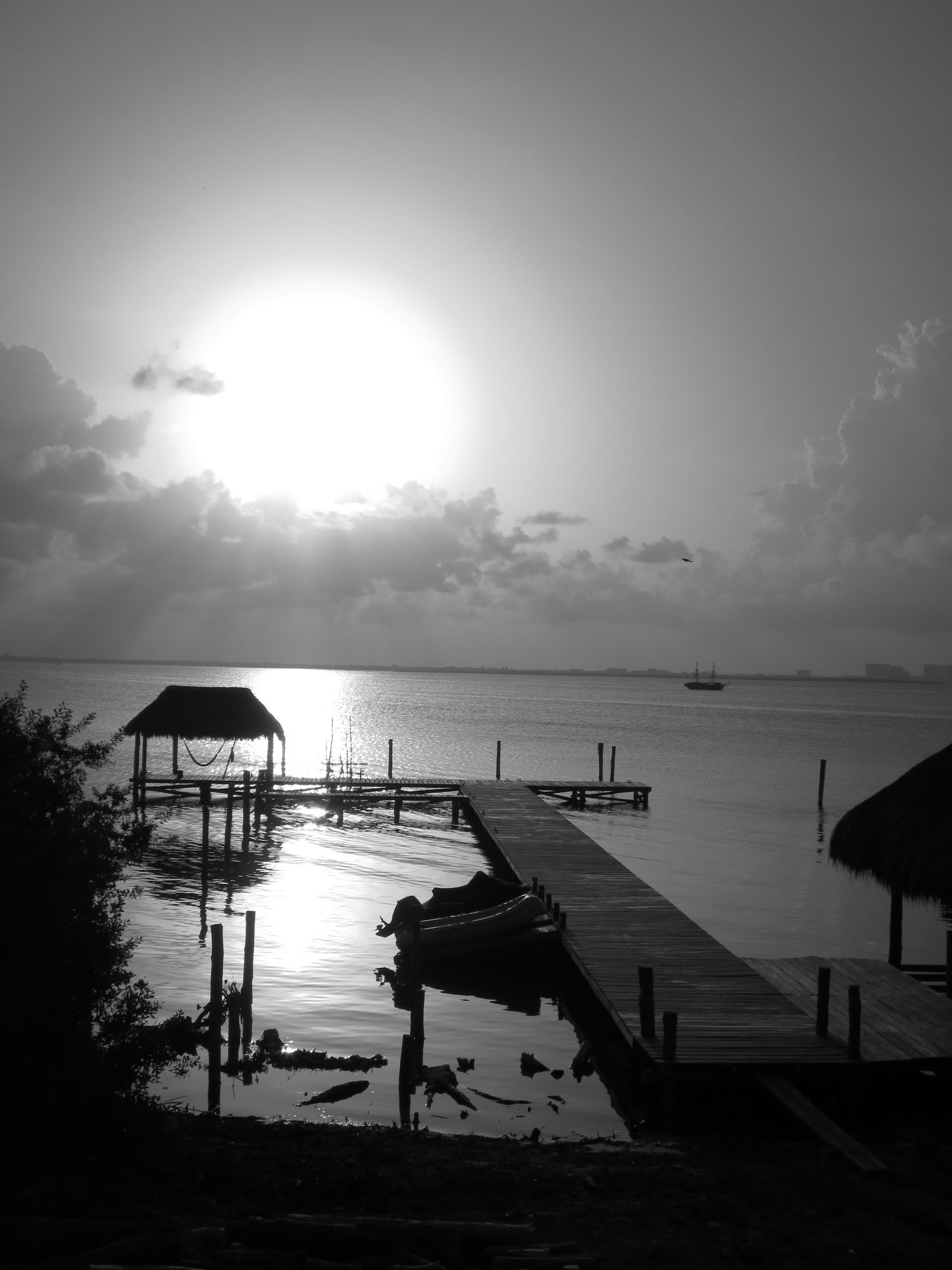 Emily and I spent the last few days bumming around Cancun, Mexico, and the nearby island, Isla Mujeres. Our first international destination has been absolutely incredible, but not without a little culture shock.

Emily and I are a team. When one of us is stressed, or freaked out, the other makes an effort to take charge, calm the other person down, and get a game plan together. I’ve spent 9 wonderful years with Emily as my significant other, so it’s not hard for me to tell when she’s having a rough time. Our first morning, my spidey-senses indicated that Emily was having a bit of culture shock. If you can’t tell from reading the blog, Emily is a planner. She likes to have every detail and contingency worked out for every day, at home, and abroad. While I like to have a general idea of what’s going on, I’m more comfortable flying by the seat of pants and improvising as we go. Our first morning, we didn’t have a single plan. Imagine what this did to Emily.

Over dinner on day one, we had a conversation on culture shock. Emily made the excellent point that the first day in a new place is always hardest because humans crave comfort, and what is familiar is comfortable. Since nothing in Cancun was familiar, she was very uncomfortable. I’ll admit, our first day traveling to Mexico was hard for me, likely for the same reason. After Emily got her bearings, and things became more familiar, she was back to her old self and having a grand ole time.

Funny things about Mexico (Or, observations of an ignorant Gringo) 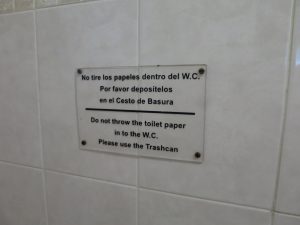 ….Uhhh, what? I just throw my feces laden toilet paper in the trash? In the bathroom? For real? Naturally, many of the bathrooms (our hotel bathroom included) smell exactly like you’d expect if you left a bunch of poopy toilet paper in a hot, humid room with no ventilation for hours on end. Que bueno!

This area is a long strip of land immediately to the East of Cancun and is filled with resorts, luxury stores (think Gucci and Prada), and tons and tons of tourists. We made an afternoon trip out there to poke around and visit a cigar store. The whole area was crazy expensive, and I would not stay there. If you’re looking to have a luxurious, expensive vacation with lots of familiar restaurants and stores (think Outback Steakhouse), the Zona Hotelera is for you. If you want to spend more time around the locals and eat where the locals eat with affordable accommodation, get a hotel downtown. It won’t be as nice, but it will be significantly less touristy.

Our hotel was in the downtown area of Cancun, about 500 yards from the main bus station. The area is filled with little shops and restaurants and has significantly less tourists than other places in the area. We were right next to Parque la Palapas, a town square that hosts carnival-like events in the evenings, complete with street vendors, musicians, carnival games, and rides for the kids. If I ever return to Cancun, I’d stay in this area again.

We spent the better part of a day on Isla Mujeres and did not enjoy most of it. We had a late start and caught the noon ferry to the island. Upon arrival, we found ourselves in a tourist trap. Don’t get me wrong, the island is picturesque and the vendors aren’t too pushy, but the area is clearly geared towards tourists. Patrons of the island can rent golf carts for $20 USD/hr to get around. Being on a budget, we declined to spend that much, and opted to walk around instead. This was a mistake. The sun was punishing. I got cranky. Emily got cranky. We took a taxi to the south end of the island, hoping to find a place to snorkel, and came up empty handed. We tried walking back (again, a mistake) and ended up taking a taxi back to the north end. We found a guide to take us snorkeling for a very good price, but the snorkel masks wouldn’t fit over Emily’s glasses. Emily is blind without her glasses, so she wasn’t keen on spending the money to snorkel when she would only be able to see fuzzy outlines of fish. We instead opted for an afternoon on the beach. We swam in the refreshing waters, and lounged on our rented beach chairs to try and salvage an otherwise expensive, hot, and exhausting day.

This place was charmingly chaotic. It’s a bazaar-like collection of tiny shops filled with pushy shop owners who’d cut off their own hand to get you into their store. They all speak excellent English, and will try and get your attention by calling you by your physical features. Emily got called “Ireland” a few times, while I got called “Whiskers.” We were both referred to as “Honeymooners” about twenty times. I eventually started telling them, “Sorry, we’re divorced.” Emily did not find that as funny as I did. To the shop owners’ credit, a simple, “No, Gracias” is all it takes for them to leave you alone and move on to the next tourist. A few pushy salesman did not take the hint, and only left us alone after I refused to speak English with them, and pretended to speak only German. Turns out my BA in German is useful after all! The other notable thing about this area is the number of “Cuban” cigars being peddled by the locals. Fake cubans are pretty easy to spot (real cubans are never sold in glass top 5 packs), and nearly every single shop had tons of “cubans” for sale. I would wager that there are more fake cubans in Cancun alone, than there are real cubans in the entire world.

Cancun can be extremely cheap, or extremely expensive. It’s up to you. We stayed mostly within budget, save for our tiring and frustrating day in Isla Mujeres. When I say it can be cheap, I mean that two people can eat a filling dinner with drinks for less than $4USD. However, you can walk one street over and eat nearly the same meal for ten times the price. I had pretty mediocre seafood for lunch on Isla Mujeres for about $15USD. I had a much better dinner in Parque la Palapas for about $1.50USD. Cheap hotels seem to cost around $30USD a night in the downtown area. Looking at the resorts in the Zona Hotelera, I’m sure you can spend twenty times that.

To be honest, I wasn’t super thrilled for Cancun going in. I thought it would be expensive, crowded, and too touristy. I’m happy to report that I was wrong. While it was crowded, and certain areas were touristy, I had an excellent time there, and would happily return in the future. Up next are Valladolid, Chichen Itza, and Merida- all in the Yucatan.

One thought on “Cancun Culture Shock, and Fake Cubans!”