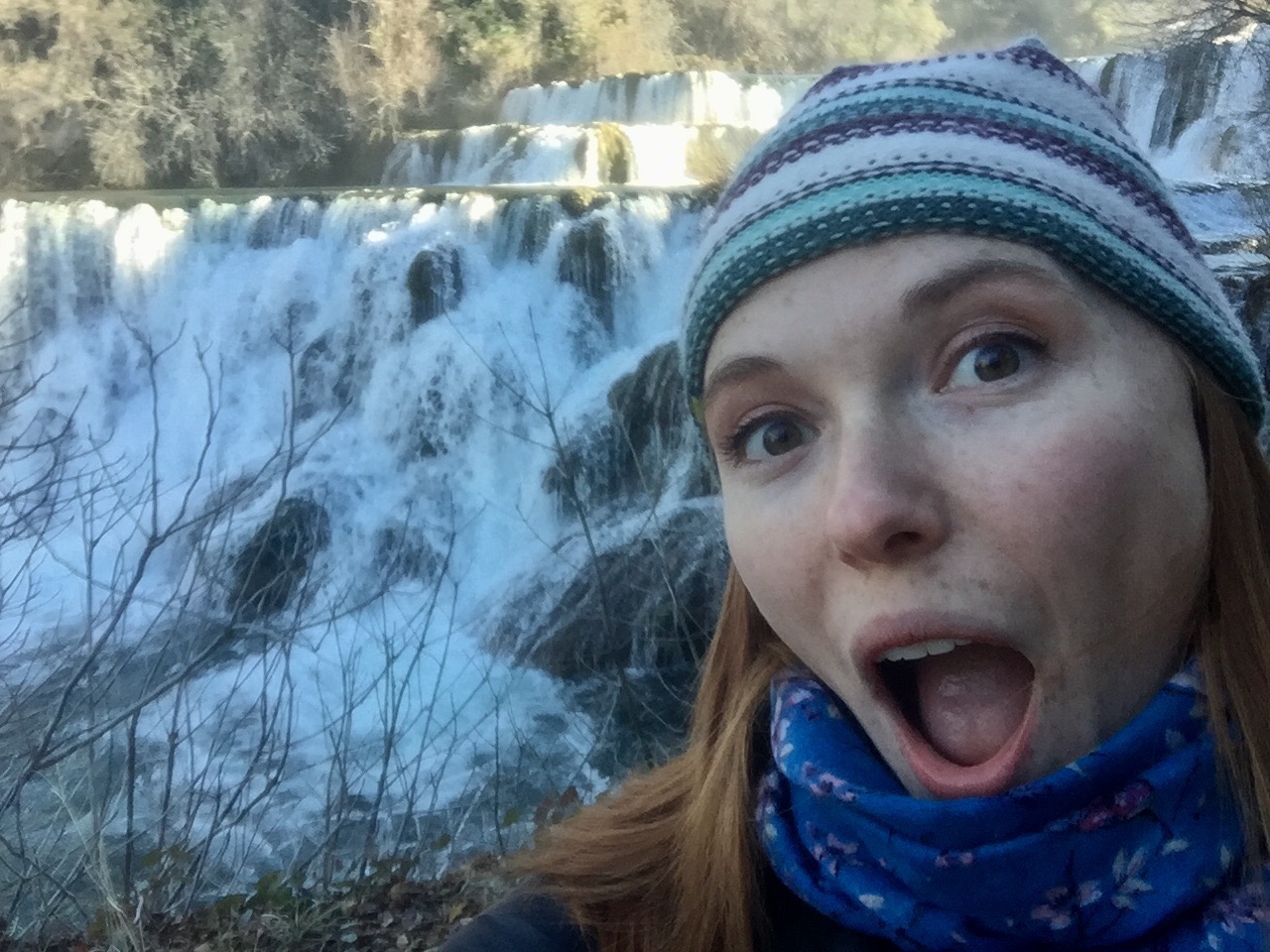 While sitting in Belgium planning the next leg of our trip, I couldn’t stop looking at all the gorgeous national parks in Croatia. Both Plitvice and Krka National parks are filled with stunning waterfalls, plentiful and large enough to make your jaw drop. I just had one big problem: we only had one week in Croatia and with two national parks and three cities on the itinerary, I didn’t know how we could get it all done. To make matters worse, it seemed hard to find buses to the parks in the off season. Here’s where my *genius* idea came into play. Why don’t we just rent a car? We had purchased international driver’s permits for this reason, hadn’t we? It couldn’t be that expensive in an Eastern European country, could it?

I set to work on my research. Originally it looked like it would cost up to $120 USD for the rental. That was painful, but doable. After talking to a friend, I was directed to a different site. It said the cost of the car would be about £20. Now that’s the bargain I was looking for! I figured there would be some hidden fees (like the cost to insure the car), but it wouldn’t be more than the original $120 I saw.

Feeling triumphant that I could see everything on my Croatian bucket list with ease, I began working on the second issue: convincing Peter. Peter did not share in my excitement. In fact, he seemed quite cynical of my big plan. He correctly guessed that he would be the one driving the whole time, and he stated that he wasn’t comfortable driving in a country with a different language and road signs. I brushed these concerns aside. How bad could it be? We had heard from a friend that it was easy to drive in Croatia. Peter would soon see it was all worth it, right?

Peter was feeling pretty uneasy as we headed to the rental company our first morning, but he tried to put on a positive face for me. When we arrived, we were greeted by two employees who must have previously sold used cars, considering the hidden fees they pulled on us. The £20 car rental turned into a $195 expense after the insurance and whatever other unknown charges were tacked on!

I wanted to walk out right there, but what could we do? We already made the reservation with the car company, and we didn’t know if there was a charge for backing out at the last second.  We also didn’t know the bus schedule so our whole day to Plitvice might get scrapped, and we already booked our next hostel for that night in a town hours away. I clenched my teeth as I watched what felt like Peter signing his soul away to the devil. The whole experience felt so dirty and deceptive. If only our problems stopped there.

With a guilty conscience and an aching wallet, I climbed into our new rental car. The excitement of being in something so new got washed away by the bitter taste of the unexpected expense. I had meant to research all the traffic signs before we left, but exploring Zagreb got in the way. Consequently, within the first five minutes of our driving adventure, locals were honking and swerving around us. We had no idea what anything meant or which way to turn. Our phones don’t work without wifi and for some reason the voice on Google Maps was muted, so I was trying to guess the correct streets to turn onto as Peter sped past them. I guessed wrong a few times, once leading us onto a one way. That didn’t go over well.

It didn’t help that Croatians drive more aggressively than any other drivers on our trip so far (and that’s saying something considering our experiences in Salt Lake City and Los Angeles!) On multiple occasions while Peter drove the speed limit, another driver would be so exasperated with his “slow” driving that they would pass on the shoulder or around a blind corner with a solid white line. We quickly realized that Croatians treat traffic laws as mere suggestions.

The highways were cake compared to the city, however. When we arrived in Split, we stressfully maneuvered through the streets until Google Maps led us to a side street that at first glance definitely looked like a sidewalk. You know those tiny cobblestoned streets we all love in Europe? They are not so lovely to drive on when they’re crammed with pedestrians and parked cars. Peter began manically laughing like he does in high pressure situations.  That’s how I knew it was serious. We drove several blocks to the top of the hill on this street and finally found a parking spot. I wanted to kiss the ground. I was so glad to be out of that car. We only hoped we parked it in a legal place where it wouldn’t be towed. (Thank goodness it wasn’t!)

As though I wasn’t in the dog house enough, Europe’s gas prices are astronomical compared to the U.S. Luckily we had a fuel efficient car because a gallon of gas cost about $4.80, so we ended up spending $72 on gas alone. Add on the nearly $40 expense for all the toll roads we had to drive on (which was the entire highway), and you’ve got yourself a ridiculously terrible deal! I take pride in my budgeting capabilities- I’ve been nearly exact with most of the countries we have visited, but this car rental put me to shame. It made a mockery of my budgeting skills.

All I wanted to do by the end of our Croatian road trip was get as far away from that rental car as possible. It was a money-sucking death trap that only sullied my otherwise spotless budgeting reputation. But the car wasn’t going down without one last dig. We headed toward Zagreb on our last day with the car. It was dark, and we had already driven four hours up from Split. It began to snow, caking the trees and highway, and making everything icy and dangerous for the already reckless drivers. Peter stayed calm despite the worsening conditions just to keep me from freaking out. (I’m not always the most helpful in emergency situations, so I get it.) We made it through the highway, but we got to Zagreb just in time for rush hour.

We didn’t want to stop at a gas station with cars whizzing past us on the major roads, so we put it off until we were in town. Wrong move. Gas stations basically don’t exist in town, so we found ourselves getting closer and closer to the rental station with nowhere to fuel up. The last thing I wanted was to get through all this stressful traffic that had Peter at his wits end, only to exclaim, “turn around!” as soon as we got to the rental station; and yet that’s exactly what happened.

To tack another mistake onto my ever-lengthening list with this car, I hadn’t realized when I booked the return date that it was on a weekend. As a result, the shop was closed and we had to pay extra money to have an employee meet us there after hours. However, when we showed up, the place was dark. We had ten minutes to go find gas, get back by the scheduled time, and hope that someone actually showed up to check the car back in. (The thought of keeping this car another night made me sick to my stomach.)

Since our phones don’t work without internet, we didn’t know the location of the closest gas station. I had to jump out of the car and stand outside the rental company long enough to poach their wifi and get Google Maps working. Luckily, there was one gas station in town a mile from us.We went and fueled up. “Please, Peter, don’t convert how much that gas cost!” I thought to myself. He did. It didn’t help my case. We headed back.

By now the Croatian drivers, frustrated with rush hour and the lack of parking spots downtown, were getting even more aggressive. Both Peter and I silently thought to ourselves, “This is going to be when we crash. The last block will be when it happens. Man, I hate this car. Please, just get me there in one piece!” Thank goodness our wish was granted! We did make it to the rental company in one piece, but the lights still appeared to be off. Will this ever end?!

We drove around the corner to see a worker stepping out the side door and waving us over to park.
“Was everything okay?” he asked.
“Yep,” we replied with curt smiles.
“Okay, you’re good to go.”

We walked out the doors with a deep sigh of relief. We had survived our first rental car experience! Maybe starting out in another country with a different language, road signs we didn’t understand, and extra aggressive drivers was not the best idea after all. Perhaps I was a bit naive for not realizing all the hidden fees, but from my perspective, rental car companies make car salesman look like trustworthy neighbors.

I learned quite a few things the hard way through this experience:

1. Rental cars aren’t for budget travelers.
2. Always take the public transport in a foreign country you’ve never visited before.
3. If you absolutely have to rent a car, contact the company before you book it and find out how much it’s actually going to cost after insurance. Don’t trust the booking website.
4. Listen to your spouse when they say they aren’t comfortable doing something. If I had listened to and respected Peter’s concerns, we never would have been in this situation in the first place.

Hopefully none of you have experienced (or will have to experience) a rental car mishap like mine. Take my mistakes and lessons learned to heart so you can avoid losing money, sleep, and saying the words, “You were right,” to your spouse.