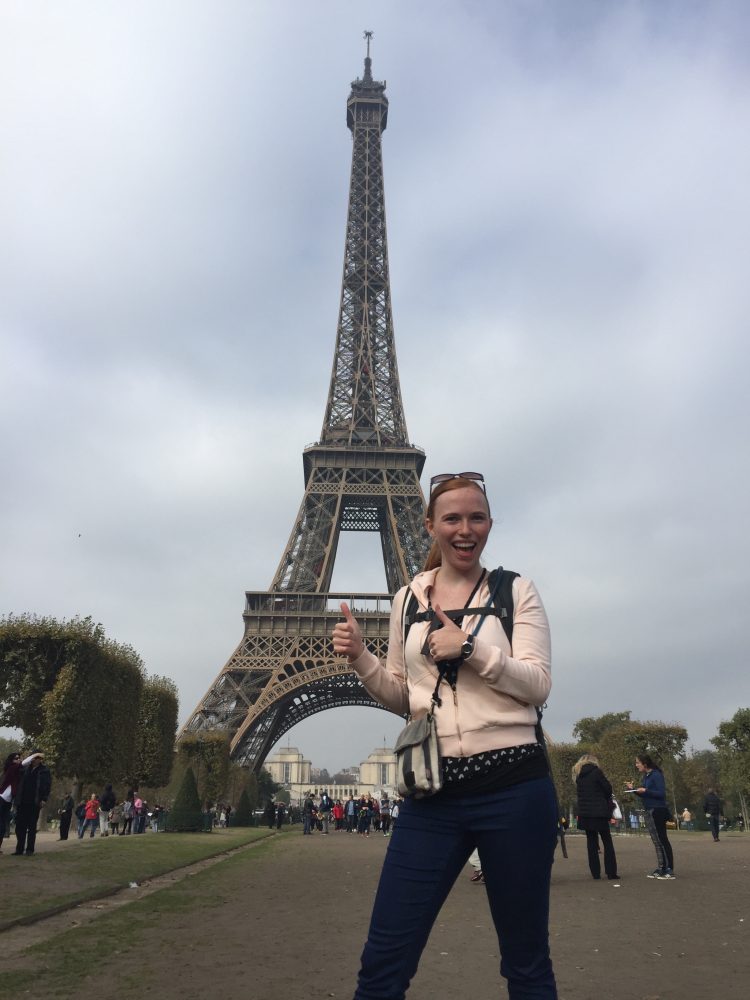 Paris is an iconic city that I’ve grown up watching in movies and seeing in pictures. On top of that, I visited it about seven years ago for a few days with my family, so I may have felt like I knew it already when I arrived. However, I quickly discovered Paris has much more to it than the Eiffel Tower.

As soon as we arrived in Paris, our friend Cynthia, a native Parisian, gave us three rules:
1. Be aggressive in the metro.
2. If you’re going to cross the street and you have the right of way- just walk, any hesitation and you’ll get hit.
3. On an escalator, always move to the right. If you don’t, rushed Parisians will push you over to get by.

Basically what you can take from this is that Parisians are not messing around. You either step out of the way or put on your big-boy pants and rise to the challenge.

Peter and I didn’t have long to get acquainted to this “survival of the fittest” form of public transportation. The moment we left the airport, we experienced it first hand. As soon as the bus pulled up, a cluster of people larger than the capacity of the vehicle squeezed themselves through the door like we were trying to do a clown car trick. It was so packed with people that I could smell the body odor of the man looming over me in the aisle, and I couldn’t even see Cynthia in the seat across from me. The metro wasn’t much better. (Luckily, Cynthia got me a delicious eclair to munch on, so it wasn’t all bad.) In fairness, after nearly three weeks, we never saw the public transport as busy as the day we arrived.  Regardless, when it’s rush hour in Paris, be ready to puff up your chest and start pushing.

Since I’m on the topic of aggression, let me warn you about the teenage gangs of Paris. They usually won’t hurt or steal from you if you avoid interacting with them, but there are a few things to watch for: a group of young girls asking you to sign something are actually trying to pickpocket you. They populate all the major tourist attractions. We saw one group like this swarmed around a tourist, but the girls were caught when the man’s wallet accidentally fell on the pavement during the transaction. Startled, he picked it up and walked off in a huff. Rather than feeling embarrassed, the girls spent the next half mile shouting at each other in Romanian over who was to blame. Another time we were waiting for a metro when we saw a group of middle-school aged boys and girls across the track kicking at a vending machine until candy came out. (This was in broad daylight surrounded by bystanders). Cynthia explained that these kids know nobody will say or do anything because if they get in an altercation, the adult will be the one who’s charged. Minors don’t get any real consequences in the French judicial system, so these kids know they have nothing to worry about. Still though, I wouldn’t stress about these teenage gangs, they won’t give you any problems if you keep an eye out and avoid them if you see them.

The Verdict’s Out on Escargot

Okay, now that we have the big-city precautions out of the way, let’s talk about the real reason we all visit Paris: the food!

Let me tell you, Paris did not disappoint here. I’m pretty sure Peter and I lived off pain au chocolat (a croissant with chocolate inside) and baguettes for three weeks straight. I even tried some French classics such as white asparagus (I didn’t know that existed) and escargot *gasp*. It’s important to note that I am not a picky eater, but I draw the line with things that jiggle. I can’t handle that consistency. Pudding? No thank you. Jello? No way! Considering escargot is a slimy snail, I did not have high hopes. Regardless, Cynthia insisted I try it, and since I want to be open to new things, I went along with it. Well, the verdict is out. . . I loved it! Escargot isn’t jiggly at all and the spices are so delicious I almost forgot what I was eating (minus the fact that I pulled it out of the snail’s shell). I never thought I would say this, but I actually crave snails occasionally now.

The Quest for the Mythical Eclair

Let’s talk about eclairs for a minute. When we first arrived in Paris, I was under the impression that eclairs had whipped cream as their filling, but I quickly discovered my mistake. Most eclairs are actually filled with a pudding substance. If you recall my comment earlier, I’m not the biggest fan of pudding. However, I did not let this pudding revelation stop me. I vowed to begin a quest through Paris to search every boulangerie trying all colors of eclairs until I found the mythical whipped cream filled eclair. Cynthia asserted that these eclairs do not exist, but I held out hope. After three weeks in France and countless eclairs in my stomach, I began to question if I had made it all up in my mind.  Maybe I had only dreamt about whipped cream eclairs? Was it in a bad French knockoff movie? Although I was disappointed, I did find some gourmet eclairs during my search that made pudding taste delicious, so it wasn’t a total loss. Yet on our last day in Paris, I walked into the bakery only a block from the house, and guess what I found?!

Whipped cream eclairs DO exist, they’re just not common and they go by other names. I have to say though, after eating the infamous whipped cream eclair and basking in my newfound discovery, the enjoyment stopped there.  I actually preferred the boutique style L’eclair de Génie. They had a perfect balance of creamy buttery goodness, beauty, and flavor all wrapped into one.

So the Parisians may have an aggressive streak when it comes to their public transportation, but if that competitive nature feeds into their passion for exquisite foods, by all means, I’ll support it. Just push me out of the way on the escalator, I can take it! (As long as I get an eclair to munch on in the process.)