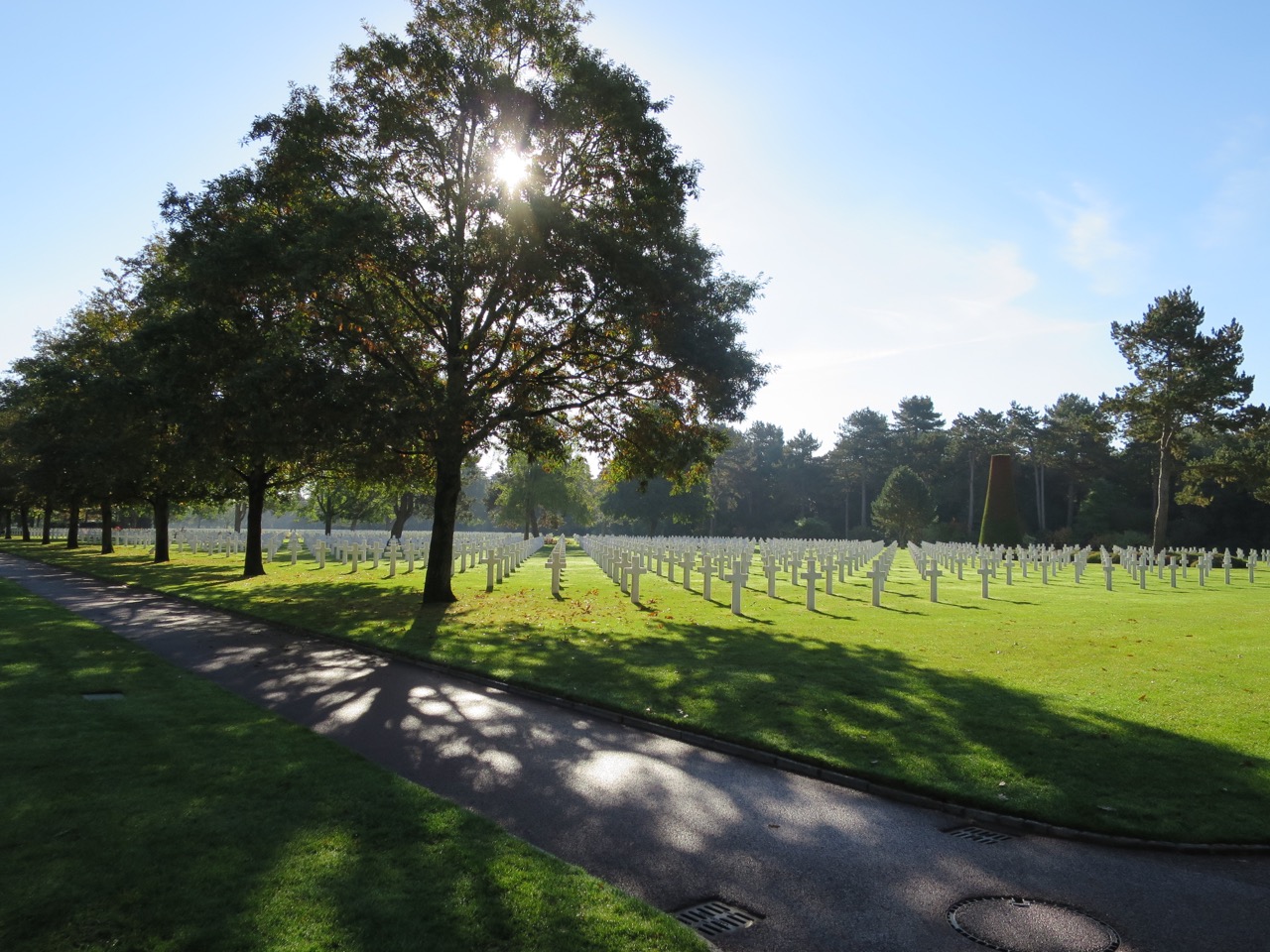 When Emily and I planned this trip, one of the first destinations I wrote down as a “must-see” was the beaches of Normandy. World War Two history has always interested me and my last visit to Paris was too short of a trip to make it to them. We spent four days in Bayeux, Normandy and visited a number of towns, beaches, and other sites important to Operation Overlord.

I’m having a hard time putting into words the experience. Before making the trip, I rewatched HBO’s mini-series, Band of Brothers, I read Stephen Ambrose’s Band of Brothers, and the night before we took a tour of the beaches, Emily and I watched Saving Private Ryan. Reading and watching depictions of the D-Day invasion does nothing to prepare you for just how big of an area Operation Overlord encompassed, and just how emotional a visit to the site is.

We took a full day (10 hour) tour of the area through Overlord Tours, based in Bayeux. As budget travelers, the cost nearly scared us off (at 95 Euros per person), but the tour was worth every penny and then some. We considered going to some sites ourselves and doing a self-guided tour, but I’m glad we didn’t. The area is too large to do without a guide, and you don’t know what you don’t know, so you’re guaranteed to miss a lot if you go solo. If you go, hire a guide. I’d happily recommend Overlord Tours. Our guide, a British man named Jonathan, carted us from site to site and explained in great detail both the major events of Operation Overlord, but also mixed in individual tales of Allied and Axis soldiers. I won’t go over every stop that we made, but the following sites were highlights of the day.

We first stopped at German 150mm gun batteries on Longues-sur-Mer. These guns launch 99 pound (45kg) projectiles up to 12 miles (19km) away. A morning fog hung densely in the air and made the guns seem even more unsettling.

Then, we headed North to Omaha beach. This beach, the bloodiest of Operation Overlord, is famously depicted in “Saving Private Ryan.” Standing on the beach where 6,000+ of my countrymen fought and died 72 years prior gave me chills. At low tide, the point of departure of the Higgins landing craft to the base of the sand dunes is around 300 yards. That’s a long way to wade through the water, and run through the sand before reaching any kind of cover, all while under MG42 fire. I kept scouring the sand, expecting to find spent 30.06 brass, or some other evidence of the bloodshed. I found none. What I found instead was an otherwise serene beach- with no indications that this very location was the place death found so many Americans. I walked to the water’s edge and faced the sand dunes, trying to imagine what the invading soldiers saw and felt, but I was unable to. I think such a traumatic event is unimaginable unless you’ve been in it.

The American Cemetery at Colleville-Sur-Mer

After Omaha we made our way to the American Cemetery at Colleville-sur-Mer. A total of 9,387 Americans are interned here. While constructing the cemetery, the US government asked the families of the fallen if they wished to have their loved ones buried in Colleville or have the remains shipped home at the government’s expense. Over 60 percent opted to have the remains returned home. Even so, the cemetery is massive. Pictures cannot capture its size. Walking through row after row after row of white crosses and Stars of David made me feel small and my life’s accomplishments insignificant. Finding so many nameless crosses, bearing only, “HERE LIES IN HONORED GLORY, A COMRADE IN ARMS KNOWN BUT TO GOD,” overwhelmed me. The experience is emotionally draining.

We moved onto St. Mere Eglise to see where Major Dick Winters and some of the boys of Easy Company landed, as well as visit the Airborne Museum. The museum had both a Waco glider used during the invasion, as well as a C47 used to drop Paratroopers west of Utah beach. The highlight of the museum was the interactive building that chronicles a Paratrooper’s journey from jumping over enemy territory, through the Battle of Hedgerow. The experience starts with museum-goers standing in a replica C47 with mannequin paratroopers, while the sound of C47 engines blare loudly over hidden speakers. A jumpmaster yells orders to “STAND UP” and “CHECK GEAR” before the Green Light at the door flicks on and you walk to a glass bridge over a model of St. Mere Eglise and the surrounding area. As soon as you step out, a blast of cold air hits and loud bangs and flashes of light (simulating German FLAK) surrounds you. The cold, dark room is dotted with little white parachutes. The entire experience is exceptionally disorienting.

The next room features a mockup of numerous battles that occurred in and around St. Mere Eglise immediately after the drop, while the sounds of M1 Garands and MG42s fill the air. The final room depicts the Battle of Hedgerow. As you walk through a maze of fake hedges, you hear equipment clanking and the sounds of people trying to sneak around in bushes. You also hear the sound of a rifle chambering a round, or a belt-fed machine gun cover being closed. Once these sounds have got you nice and on edge, you’ll round a corner to find a mannequin dressed as a German soldier with an MP44 or Kar 98 leveled at your chest. It might sound cheesy, but the museum does a remarkable job with immersing you. I consider the museum a must do for any visitor to the area.

We then visited Utah Beach, where a replica Higgins landing craft sits just before the beach. A group of young french children spent some time playing in and around the landing craft, laughing and having a great time, blissfully unaware of the historic personal and collective sacrifice that took place in the very spot they stood. Towering above them stands a bronze statue of American troops, posed storming the beach. 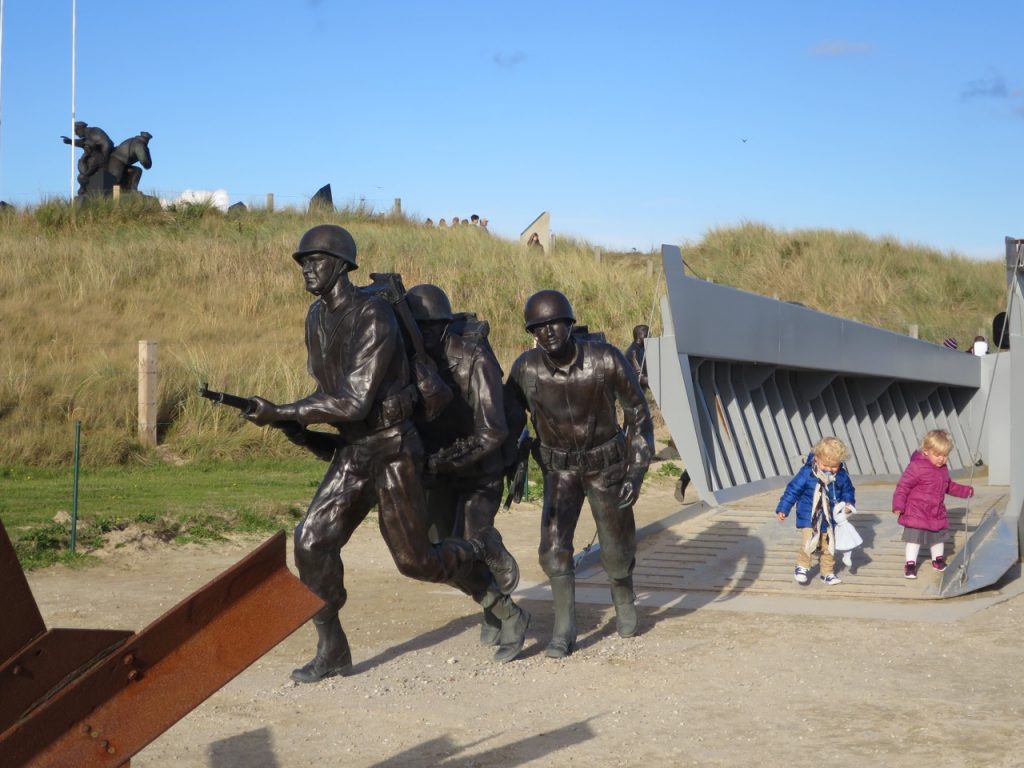 We ended our tour in Angoville au Plain. Here, two American medics, (Bob Wright and Kenneth Moore) set up a makeshift hospital in the local church and cared for 80 wounded German and American soldiers for 72 straight hours. The blood stained pews can still be seen today. 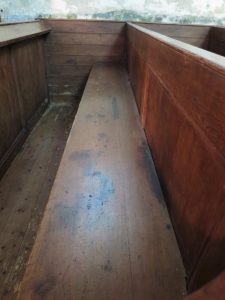 I knew that visiting the beaches at Normandy would be an emotional experience. I underestimated how profoundly it would affect me. At the end of the day, Emily and I recounted what we saw and how we felt, and we both commented on just how exhausted we were. Emily pondered, if we’re this tired after sitting in a comfortable van and having merely visited the sites, imagine how tired the Paratroopers and Infantry must have been after storming a heavily fortified beach, or jumping out of a plane into enemy territory and then fighting for days on end.

We spent Armistice Day (Veterans Day in the US) in London last week, and while discussing the personal sacrifices made by veterans with a well-spoken friend of mine, he quoted the English poet John Edmonds. I think his quote is a fitting way to end this post:

“When you go home, tell them of us and say,
For your tomorrows these gave their today.”

2 thoughts on “Exploring the D-Day Beaches in Normandy”