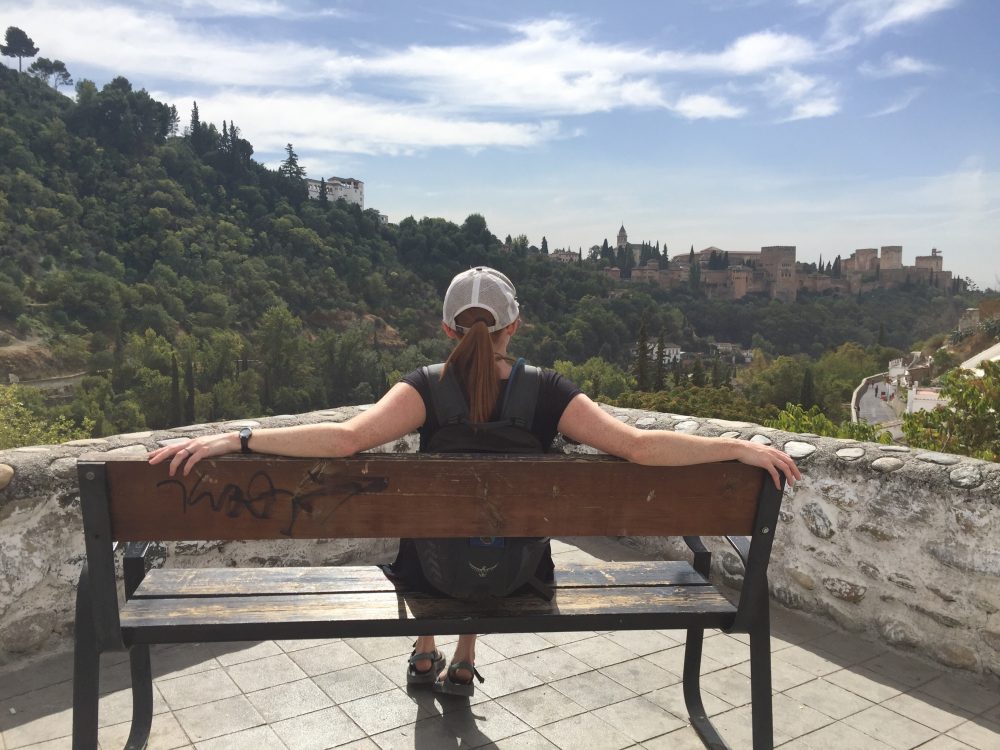 While staying with our Spanish friend Angie in Barcelona, I asked her and her roommates what traditions Spain had that were unique or different. Never in my weirdest dreams would I have imagined their answer: “We have a tradition in Barcelona where kids circle around a log and beat it with sticks until it ‘poops’ out presents.”

Everyone knows about the running of the bulls, but clearly Spain has some other traditions worth noting.

I remember walking through a quaint cobblestone street in Granada and spotting a postcard with what looked like Ku Klux Klan members marching on it. Umm. . . what? At Angie’s house, I discovered it actually “wasn’t what it looked like,” (thankfully) although the real reason may also be surprising. Angie nostalgically recounted how, as a girl, she would dress up in the white robes for the town parade which recreated Jesus’ descent from the cross. The white robes are a religious symbol in Spain with none of the negative connotations Americans associate with them. That’s why it’s perfectly normal for parents to dress up their little boys and girls in robes that would horrify everyone back in the U.S.

However, it’s an important tradition for the Spanish themselves. Angie laughed about how her mother sternly warned her not to take off her mask under any circumstances, yet of course the second she saw her friends during the parade, she pulled the hood up and waved her hand at them excitedly, “It’s me!” she yelled. Even though other culture’s traditions might shock us as adults, it’s clear kids are the same everywhere.

Not all Spaniards Speak Spanish

The traditions weren’t the only thing I found surprising. Here’s an interesting fact: Spain has about five different regional languages and they actually SPEAK them more frequently than Spanish. In Barcelona, for example, they speak Catalan. With my elementary understanding of Spanish, Catalan sounded like a mix of Spanish, French, and Portuguese. People would speak it to us in the store, and we would overhear it in cafes. Angie and her roommates explained that it can also be hard to get a job if you aren’t fluent in Catalan because it’s expected there. I wonder what it must be like to walk up to a stranger in Spain and be unsure of what language to greet them in. In school, students in Spain have to learn their regional language, Spanish, and often English or another third language. It’s crazy to think the U.S. doesn’t even mandate studying a second language for even two years after hearing that.

No Government? No Problem

Perhaps it’s this diversification between regions which has led to the gridlock in Spain’s government the last 300 days. They have not liked their options for prime minister on the last two election cycles and no party has been able to get a majority so they have just gone without one. Surprisingly, from a tourist’s perspective, things seem to be running pretty smoothly regardless. Maybe our governments aren’t as important as we think?

Now, I know politics can be upsetting, so let’s switch to a topic everyone can enjoy: food. One of the best perks of living in Spain is that when you go out for drinks, you get appetizers for free! They are called tapas and you get a new small plate for every round of drinks you purchase. We enjoyed everything from sweet meatballs with french fries to shrimp cakes or cured ham with a slice of baguette. They were all delicious! My frugal inner self is doing a happy dance right now.

Speaking of food, did you know Spain has some of the best Arab food outside of the Middle East? I know, I was surprised too. Turns out Spain was ruled by a Moor dynasty for hundreds of years during the Medieval period, and as a result, they have a strong Arab influence in their architecture and cuisine. You’ll quickly notice the colorful red wallpaper, velvet cushions, and stained glass chandeliers that decorate the copious Arab restaurants as you walk through the streets of southern Spain. Their roasted dishes were some of our favorite in Spain, so it’s definitely worth stopping in for a bite.

Since we are on the topic of Spain’s history, did you know some Spanish once lived in caves (and a few still do)? In Granada, we got to explore some of these caves. We discovered that back in the day there were entire communities in the caves outside town. They would dedicate one cave to the kitchen, another to the horses’ stable, and another to the bedroom (and so on). You can still visit the caves for traditional Flamenco  music and dancing in some parts.

It’s these rich histories and traditions that set Spain apart. Each region’s boisterous pride makes sense when you see the unique wonders each area has to offer. Hitting a log for presents, speaking a regional language, or living in a cave may not be part of my usual activities, but it’s still fun to appreciate all of it in Spain.

One thought on “Confessions of an Americana in España”