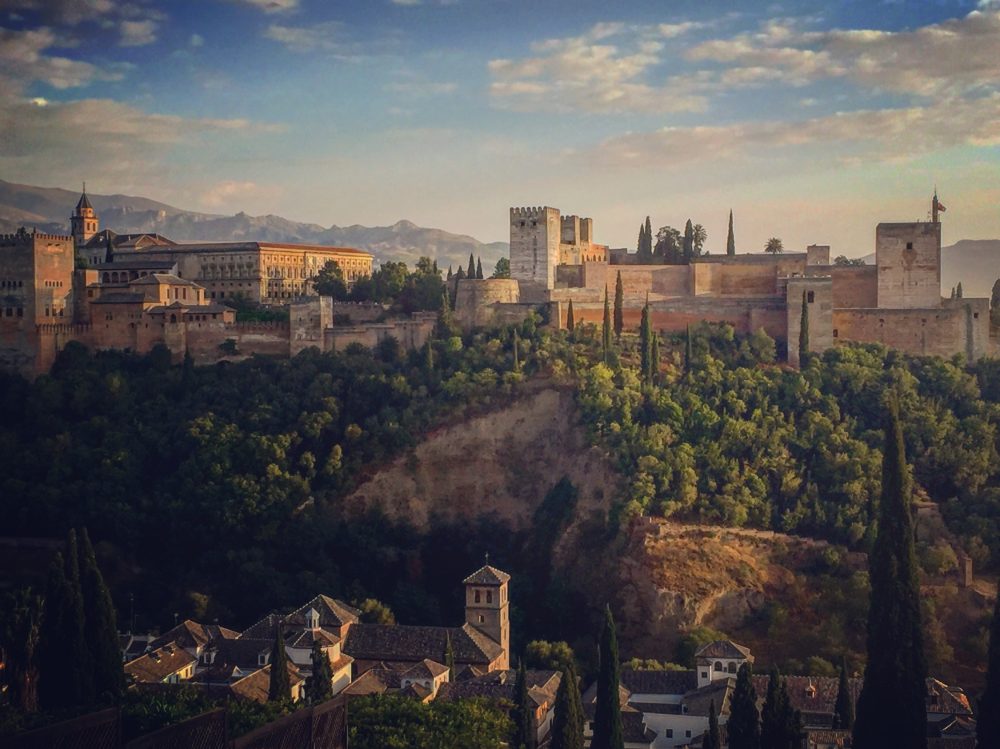 We couldn’t have picked a better country than Spain to start off the European chapter of our world travels. We spent three weeks in Spain and fell in love with the winding streets, epic architecture, and genuine people. Below I’ve listed my favorite Spanish sites that can’t be missed if you’re headed to this country.

The sheer size of this palace is enough to stop you in your tracks. It contains 3,500 rooms! No matter how many times I share this, I just can’t fathom how it’s possible to build living quarters that large. In fact, the royal family no longer lives here because they say the palace is too big. Sadly, you can only tour a tiny portion of the rooms. However, the rooms you do see each have a vivid color theme with classic paintings across the ceilings and intricate gold embellishments. Before you go, try to get your ticket online so you can skip the hour long line. (We learned that the hard way.) 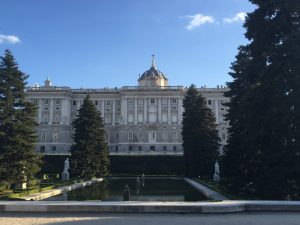 If you want a spectacular view of the city at sunset, make the trek up to the Temple of Debod. We had been told to go here, and we were so distracted by the views that we didn’t even notice the actual temple until after the sun had set. 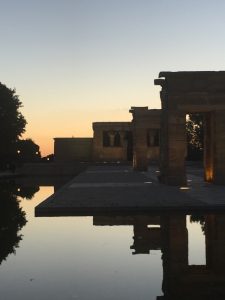 There are two noteworthy museums in Madrid: Reina Sofia and Prado, yet Reina Sofia was my favorite because it is modern art, and it includes Picasso’s Guernica mural and several pieces by Salvador Dali which one could spend hours deconstructing.

You cannot visit Spain and skip the Alhambra. It is stunning just to look at around town, but the Arabic words carved into the stone and the moorish windows with sweeping views of the city below will stay in your memory forever. Tickets for Alhambra sell out about 1-2 months ahead, but you can go to the Alhambra ticket office in town the day before you plan to visit and buy a ticket there. Make sure to have two or three possible days set aside in case it’s full though.

Possibly my favorite photo from our entire trip around the world was taken at Mirador Saint Nicholas (it’s the featured image of this post). It gives you the best view of The Alhambra. If you go at sunset, the locals will serenade you with traditional Spanish music. It’s quite romantic.

Before the sun completely sets, make your way from Mirador Saint Nicholas to Mirador de la Lona just down the street. You get a fantastic view of the entire city of Granada, and there are several tapas bars nearby to sit and have a drink afterwards. Either that or you can wind down the narrow streets and find some amazing Arab food at the bottom. 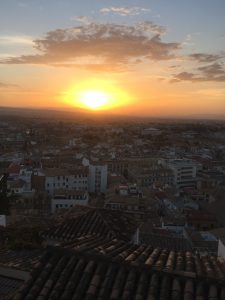 Spain was ruled by a Muslim empire in the Medieval period, which has led to a very strong Arab influence on parts of Spain, particularly Granada. As a result, Granada has some of the best Arab restaurants and food I’ve ever tasted. My favorite was roasted lamb and vegetables with dates and Pakistani milk tea. Absolutely delicious! 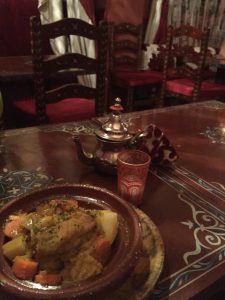 Plaza de Espana nearly brought me to tears, it was so beautiful. The moment I saw it, my mouth literally dropped. This was my favorite architecture in Spain, hands down, and it can’t be missed. If you’re a big Star Wars fan, they used Plaza de Espana as Queen Amidala’s palace in Episode Two. You can’t visit without strolling through the vast gardens directly in front of the Plaza as well. Carriage rides and family bicycles are other options of transportation.

I especially enjoyed admiring the Seville Cathedral’s gothic architecture. This cathedral is one of the biggest cathedrals in Europe (and the biggest Gothic Cathedral in the world). Christopher Columbus is buried here. We just happened to visit him on Columbus Day (what are the odds?!). If you like cathedrals and you want to avoid the long line in the morning, go to the Church of El Salvador and buy a combined ticket there. It gets you into both churches, and if you find a worker at the front of Seville Cathedral, they’ll guide you past the long line and straight in. 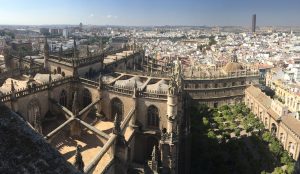 The Seville people may be split on whether this gigantic structure is an eyesore or an asset, but we definitely enjoyed climbing around the honeycomb structure and appreciating the views at sunset. You also get a free drink at the top with your 3 euro ticket, so that’s an added bonus. 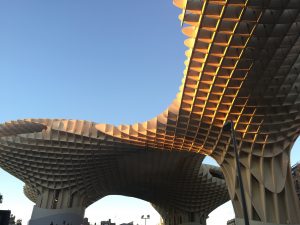 This is one of the oldest palaces still in use. Honestly, it doesn’t compare to Alhambra in its stone work (although it’s still impressive), but it’s gardens are beautiful and they have a waist-high labyrinth. To avoid the long lines, go around 2pm. 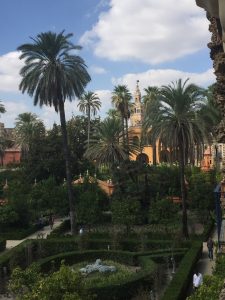 Plaza de Espana stunned me with its architecture, but Montserrat equally amazed me with its location. You know what they say about property: location, location, location! Well, Montserrat blows any other cathedral out of the water simply by being built atop a jagged mountain with stunning views of the surrounding cities and mountains. You can’t even get to Montserrat without a cable car ride or a steep train ride. It’s only two hours from Barcelona, but dedicate a day to Montserrat so you can take your time and hike around the area. It was one of my favorite places in the whole country.

One thing that surprised me about Sagrada Familia is that there is a clear difference between the side Antonio Gaudi built while he was alive and the rest of the cathedral that they are continuing to work on today. My biggest regret from Spain is that Peter and I didn’t get a chance to see inside this magnificent cathedral. I mistakenly assumed it wouldn’t be much different than the hundreds of other churches we’ve seen on our trip. However, true to his style, Gaudi built a magnificent inside that mimics nature. I’ll have to return to Barcelona just to see this wonder. To avoid what happened to us, make sure to book your tickets online a day or two before you plan to visit Sagrada Familia.

Another Gaudi wonder that requires buying tickets online the day before. Peter wasn’t very impressed with Park Guell, but I love Gaudi’s quirky style. Even if you aren’t into architecture or Gaudi, it may be worth visiting Park Guell just for the views. Another place for awesome views though would be Mount Tibidabo, which we didn’t get a chance to check out, but looks awesome as well. 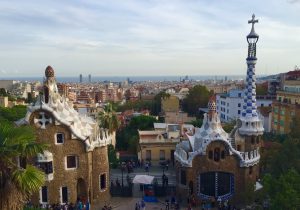 Whenever you hear about Barcelona, people are so focused on Gaudi, that you may not even know Barcelona has a beach. I wasn’t expecting much as we neared the beach, but I was pleasantly surprised. It was hopping with shops and people. 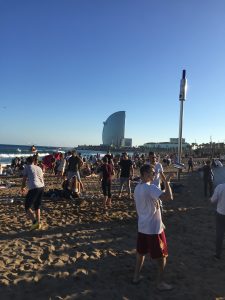 It’s clear just from the sheer length of this list that Spain has a ton to offer travelers. I could have added several other attractions as well, but I’ll leave the rest of those gems for you to discover on your own. Despite all its beauty, one of our favorite things about this country wasn’t the concrete objects you can visit, but the great friends we met or reunited with along the way. Long evenings of tapas (the traditional Spanish dinner) and wine while discussing each other’s cultures and practicing our terrible Spanish will be some of my favorite memories. Don’t just take my word for it though, visit Spain and experience its sites and people for yourself!

One thought on “The Best of Spain: A Traveler’s Guide”