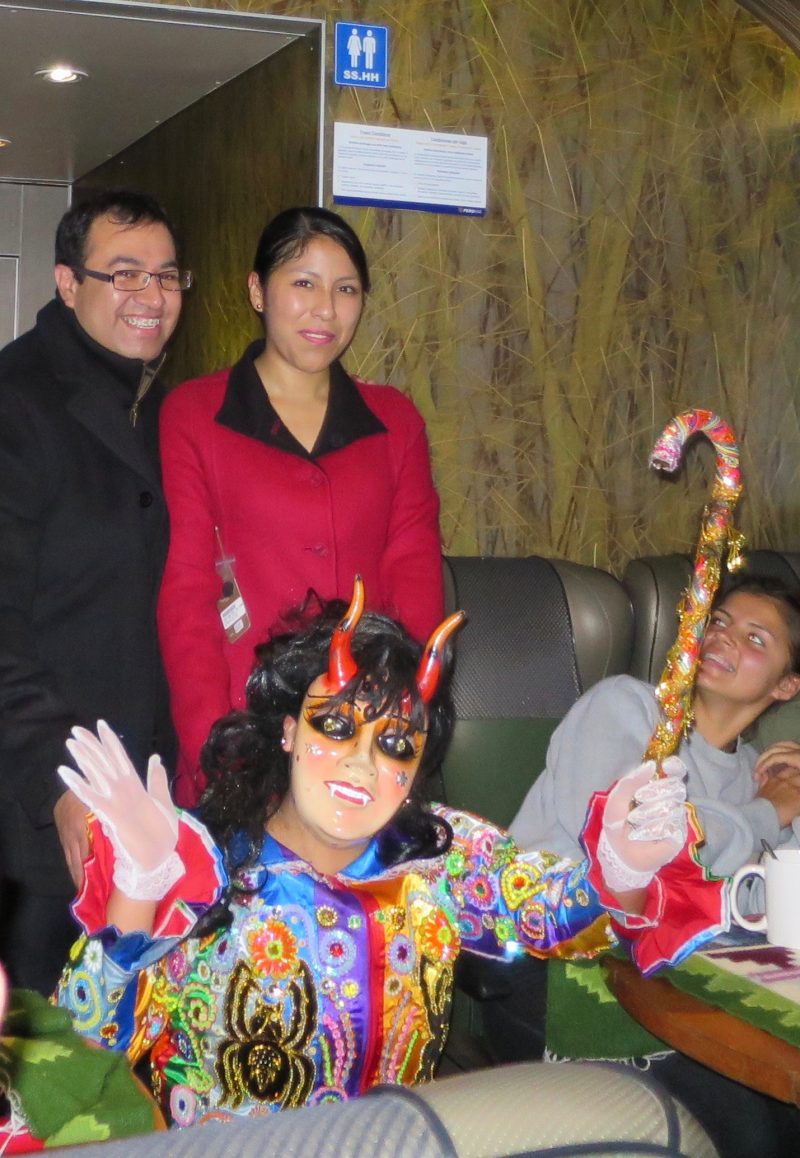 South America is a breathtaking, fascinating place, and visiting it was one of the best decisions I’ve ever made. However, it wasn’t without some surprises. Below I’ve confessed what I found most shocking or interesting about each county we visited in South America:

Let’s set the stage. I’m slumped over in my chair. My face is on fire because I’m running a fever. I have no appetite and I’m just trying not to get sick all over this train. I’ve just gotten down from Machu Picchu, and Peter and I are headed back to Cusco where we plan to take me to the hospital. The train is nice, but nothing special. We’ve been served dinner by our quiet, yet kind train attendants. I’m attempting to fall asleep but failing at it. Out of nowhere, traditional Peruvian music starts blasting and all the passengers in our cabin begin cheering and clapping their hands to the beat. I weakly turn around to find a porcelain-faced, devil-horned human dressed in bright, sparkly clothes and elf shoes. She is carrying a cane of sorts and dancing down the aisle, stopping by every other row to stroke her cane across a passenger’s face and purring at them like an animal from a SciFi film. Now, I’m already freaked out by mascots, or really anyone in a costume where I can’t see their face, but a dancing, purring, gremlin? This is out of my league. I try desperately not to make eye contact so I don’t have to interact with the porcelain face while I’m so sick. Luckily, the dancing devil-fairy leaves me alone.

After about five minutes, it takes the backstage as the other train attendants perform an impromptu fashion show for us. Like models using the train carriage as their runway, they strut their stuff down the aisle dressed in classy Alpaca scarves and sweaters, stopping at the end to pivot and illustrate the multi-faceted uses of each garment. They alternate with the dancing doll-face for an hour. Although I am too sick to appreciate the cultural celebration I just witnessed, I am grateful for the distraction from my illness. Welcome to Peru.

By now, most of you know I had more culture shock than I bargained for during my hospital experience in Peru. There, I discovered that the private hospital considered top notch in the city decided there was no need for toilet paper, a toilet seat, or even soap in the bathroom. Well, maybe they were going for the time saver approach? If you haven’t gotten the chance to experience this speedy bathroom technique, don’t worry! There will be plenty of opportunities in local restaurants and public restrooms in Peru.  If by some rare chance you aren’t able to experience the full-speed bathroom package, Peru has come up with another efficient technique: only supply one roll of toilet paper for the entire multi-stall bathroom. As each lady walks in, she grabs her necessary squares. If she fails to see this roll on the wall when she walks in, she gets to revert to the original Peruvian way! In other words, toilet paper is gold in Peru. I’m pretty sure you could use it as a form of currency.

Speaking of getting your panties in a twist, let’s talk about politics. Admittedly, my knowledge of Peru’s politics is limited solely to what I heard on our walking tour, so I have a lot more to study. However, I will do my best to recap what I learned because Peru’s political history appears to put the Trump/Clinton election to shame in terms of how-did-it-come-to-this crazy. In 1990, Peru elected a president that at first seemed to be really good for the country, but in 2000 (while he was still president), the Peruvian people discovered he was a part of a major scandal involving corruption and human rights violations. He fled the country to Japan, but after a few years, he decided it was safe to return to South America. Wrong choice. The Peruvians captured him, tried him, and threw him in prison in 2007. The really crazy part though is that his daughter ran for president this year and nearly won! Even though many people believed she was only running to pardon her father (as only the President can do), others liked some of the things her father did for Peru. They wanted her to continue them. She didn’t win the election in the end however, so the former president is still sitting in prison for the next 16 years. Even though the concept of having a previous president in prison boggles my mind, I have to say, I respect a country that isn’t afraid to stand up to a crooked leader.

Clean water! Clean water! I could brush my teeth, have ice in my drinks, and eat raw vegetables in restaurants again. Hallelujah! After 6 weeks without these conveniences, I realized just how good they truly were.  I may have been basking in my new love for agua, but I was slipping in my Spanish speaking confidence. Argentina throws the Spanish rulebook out the window, so I was back to square one. Double L’s, Y’s, and other random letters became a “J” sound like in “Rio de Janeiro”. Ayuda! (That’s “ajuda” for those of you paying attention, and “help” for the rest of you that never bothered to learn Spanish. It’s cool though, I never learned either, and that’s what got me in this predicament in the first place.)

Thankfully, I didn’t need my Spanish skills too often as I spent most of my time exploring the streets of Buenos Aires instead of talking to people. One of Peter’s and my favorite things about the city was the vast number of pups strutting the streets. We could see at least three per block. I bet you can guess what else we saw a lot of along with the gift of our furry friends . . . . That’s right- “presents”. Lots of presents. Buenos Aires is so bad at picking up after their pets that we had to spend more time studying the sidewalk than the buildings. One of our free walking tour guides warned us about this several times, only to have a guy stop his bike right in front of our tour group, let his dog decorate the pavement with everyone watching, and ride off without hesitation. Thanks, hombre. 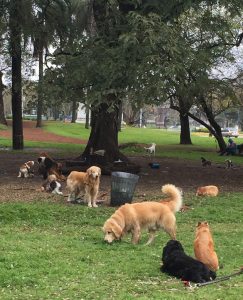 When I wasn’t inspecting the sidewalk or the buildings, I was checking out the Argentinean people themselves. (Don’t worry, Peter was checking them out with me.) I hate to break it to you, America, but the 90s are back. Rollerblades are hip, fanny packs are acceptable, and thick-soled platform shoes are all the rage. (So far Europe has only confirmed this theory with chokers and belly shirts becoming more common than UGGS in the fall back home.) I’m not too enthusiastic with the idea of returning to my middle school days. I prefer to look back at old pictures and say, “What was I thinking?!” not, “Hey! I wore that last Friday!”

If I thought Argentinean Spanish was confusing, that was language on easy mode compared to Portuguese! This language take Spanish, throws in what sounds like German mixed with Italian, and throws out the phonetic rules that make Latin-based languages so easy to read. Now I’d downgraded from a Kindergartener’s level of speaking to a two year old’s. “I’m sorry sir, I no longer have the vocabulary for manners in your language. I’m just going to speak Spanish at you and hope you get the gist. Obrigado.”

It’s no surprise the Brazilians seemed a little more frustrated with us than most of the other locals in the countries we visited. However, upon further reflection, maybe they weren’t as frustrated as they sounded? If you think German is an angry sounding language- listen to an excited Brazilian. We stayed with an older woman in Rio through Airbnb. She didn’t speak any English, and we didn’t speak any Portuguese, so we were already setup for an interesting situation. Sometimes she invited us to sit next to her in the living room while she surfed the web. Despite knowing we didn’t speak the language, she would talk to us in Portuguese at length. She appeared to think if she yelled, it would help us better understand a language we knew nothing about. Instead of helping, however, we just felt alarmed by this angry older woman. We would wonder, did we say something to offend her? Then she would laugh and our initial concern would shift to confusion. After enough hand gestures and Google translator attempts, we’d eventually get the general idea figured out.

That Brazilian passion does translate into some interesting politics. While we visited the smaller town of Paraty, a local election was underway. In Brazil, they have a lot more than the two party system, so they assign a number to each party. In addition, voting is mandatory, so the parties have to be extremely visible to win. As a result, the entire town seemed to be covered in colored flags with various numbers. People would line the streets waving their flags and chanting like a protest. They would cover small cars in the pictures of their candidate and secure gigantic speakers on top that would blast music, speeches, and campaign advertisements as they zoomed around town all day long.

The first night we were there, they lit off fireworks and cheered like it was the 4th of July. We thought they had elected the winner. Yet the next night it happened again. And again. We finally asked a local what was up, and she said they still had about two weeks until the election. However, the last week before voting, no one is allowed to talk about the candidates or persuade another person. She said it was against the law because they had issues with people trying to bribe the uninterested voters in the past. A very different system than what we have back home.

The most striking thing about Brazil, however, wasn’t the language or the politics, but the natural beauty of the country. It felt like you could walk 500 yards and you would be in yet another paradise. It was amazing to be the only ones sitting on a deserted beach that looked like something I’d find on a desktop background back home. I cannot count the times I thought to myself, “How did I get so lucky to be here right now?”

South America may have its quirks, but that is what makes it memorable. Just like you love a person for the aspects of his or her personality that sets them apart, I love South America for its unique and raw beauty. The people, the places, the politics- you can’t find them anywhere else.