My mother grew up in South Carolina, so although this is my first time in Texas, this is not my first visit to the south. I see many similarities between Texas and my mother’s home state. Sitting out on the balmy porch looking out over the lake, the nostalgia from my visits to SC in my childhood hits me. Every time I travel, I realize there is as much difference between the four corners of this country as if you visited a whole different continent. Consequently, here’s some of the culture shock I’ve felt as a northerner (or Yankee) in the South:

Oh yes, these exist. I didn’t know either. On our walk to the grocery store, I spotted the first difference of the South: a drive-through convenience store. I saw a line of trucks driving into what looked like a large garage only to make a U-turn and come back out. I peeked inside and saw glass coolers lining the walls like a gas station. A waiting attendant stood there ready to fetch whatever the next driver needed. Sadly, they don’t appear to sell a burger with your bottled coke though.

Whataburger and Other Texan Specialties

Speaking of burgers, let’s talk about them. Texans have some clear pride when it comes to their foods: particularly Whataburger. I heard about this fast food restaurant many years before I ever set foot in Texas. Whataburger is such a craze that people post pictures on Facebook or text one another as soon as they get to eat at one. Taking me to a Whataburger was at the top of the list when I arrived in Texas. In fact, it was the first thing we did with Peter’s mother and Mamaw (the Texan word for grandma).

Once we ordered our meal, the first thing I noticed about this place was that it’s the only fast food restaurant I’ve ever been to where they bring the food to your table and wait on you. They’ll grab you napkins, salt, or utensils if you need them and they wear plastic aprons. Once we were squared away, it was finally the moment I’d been waiting eight years for: I got to try a Whataburger and see what all the fuss was about. As I bit into the patty and tasted the melted American cheese and the crunch of fresh cut lettuce and tomatoes, I thought to myself, This tastes pretty much like any other fast food burger I’ve had.

Now, for fear of my husband divorcing me on the spot and making enemies with my in-laws, I kept my mouth shut. However, the dreaded moment came where Peter asked the question: “What do you think?” Now, I’m a terrible liar and even if I weren’t, Peter can read me like a lie detector, so I knew I didn’t stand a chance. I told him the truth. He furrowed his eyebrows and set his mouth in a thin straight line. As I expected, he threatened to leave me right there. I pleaded with him that sometimes our nostalgia over something makes it appear different to us than outsiders. For example, I swear that Romy and Michelle’s High School Reunion is an amazing movie because I grew up watching it, but Peter informed me it’s pretty terrible. (If you disagree with Peter, consider how old you were when you first watched it.)

Upon further reflection, Peter decided to let me off with a warning. I begged him not to inform his Texan family about my true feelings for Whataburger, but he ratted me out at the family reunion as soon as he got the chance. Despite the initial shock, I hope, in time, they may be able to forgive me.

Whataburger isn’t the only Texan specialty though. It appears you can’t walk into a Texan home without Dr. Pepper lining the refrigerator, iced tea displayed on the counter, and Fritos bean dip out and ready to eat. Peter’s mother Brenda informed me that if I ask for a Coke here, that really means I want a Dr. Pepper. I’m not sure I follow that logic, but I know from past experience that “pop” is not a recognized word here, so to each his own.

You may have noticed that my writing is a little more informal than usual. Part of that is due to the contagious southern accent. Before Peter and I arrived here, we called his mom a few times while she was staying with Mamaw. Her southern accent was back in full force. She sounded like a different person. We laughed about how both our mothers immediately go back to their southern ways as soon as they get back to their home states. Well, little did I know, this phenomenon happens to everyone. Either that, or my southern roots are manifesting themselves. Within 24 hours of being here, I’d taken to a new way of talkin’. I’ve dropped the ending consonant sounds on most of my words and picked up sayings I don’t usually think to use up north. Y’all know what I’m sayin?

I tell you what, I’ve come to realize that the southern accent is the cursive of the English language. Everything just flows off the tongue better down here. I’m guessin’ I’ll drop it as soon as I leave, but it sure is fun while it lasts.

The Nuances of the Southern Vocabulary

Since I’m on the topic of southern talkin’, let me teach you a lesson I learned the hard way. In the north, we have three different kitchen utensils we call a spatula: the utensil we use to flip burgers, the utensil we use to scrape batter out of a bowl, and the utensil we use to frost a cake. I’ve often found this confusing in the past, but that’s just the way it is. Well, I made the mistake of asking Mamaw for a spatula. She dug through the drawers and pulled out the cake frosting utensil. I tried to explain that that wasn’t the spatula I meant, and she looked at me like I was crazy. “What do you mean?! That’s the only spatula there is!” I pointed to the rubber scraper and explained that we call that a spatula too. She looked at it and said, “No that isn’t. That’s a bowl scraper.” I laughed and pointed to the burger flipper and told her we call that a spatula too (which is the utensil I had originally been asking for). Confused by my ignorance, she exclaimed, “What are you TALKING about? That’s an egg turner!” She turned to Brenda for backup that I must be crazy. Trying to stay out of the fire, Brenda did not admit that she, too, calls these egg turners “spatulas” up north. Moral of the story northerners: know your southern kitchen utensils before coming down here or you’ll come off naive.

Edit: I did check with the neighbors for clarification on the spatula issue, and they agreed that all of those utensils are called spatulas here too, so maybe it’s just a Mamaw thing.

If you’ve noticed that everything I’ve talked about has been indoors, there’s a reason for that. Holy Mackerel is it HOT HOT HOT here! At home I’m used to stepping into the house and having my glasses fog up in the winter. Here, my glasses fog up when I step outside.

Peter and I have hardly stuck a toe outside because of the heat, and we are going a bit stir crazy as a result. On Day 2 here, I had been bugging Peter nonstop about going for a walk and getting out of the house, so he finally agreed to go for a stroll. The only problem is, we’ve been so lazy sleeping late here that by the time we actually were ready to go, it was 3 o’clock. Peter strapped on a camelback filled with water and sunscreen and we headed out. It was 105 degrees, but the weather said it felt like 113 with the humidity. Needless to say, we didn’t make it very far. At best, we were out 12 minutes before we had to turn around and head back.

As we walked, people would pull over and ask us if we needed any help. They couldn’t conceive that anyone would be crazy enough to go for a walk just for fun at this time of day. You may be thinking, Don’t be stupid, Emily. Just go for a walk once the sun sets and it’s cooler. I planned to do that, until Mamaw told me that’s when all the snakes come out and lay on the pavement to warm themselves. Rattlers and poisonous Coral snakes are common in these parts, so that made my decision really easy: No thank you, Ma’am.

One good thing that comes from the continuous, unbearable heat is the hot lake water. When you step in, it feels like a warm bath splashing on your feet. I’d take this lake spa over Montana’s glacial ice water any day. Can’t we just combine the two climates and have Montana’s warm, dry summers and Texas’s warm, relaxing lakes (minus the alligators)? I guess I can’t have my cake and eat it too.

The North Has Spiders; The South Has That Plus Everything Else

I may have had my guard up for thieves and other dangerous people in LA, but here I have my guard up just as much for something else entirely: scorpions, snakes, spiders, and cockroaches. I can’t step foot in the grass without doing a thorough search for anything that moves. Luckily, I haven’t come across much so far (knock on wood) except a dead baby scorpion on Mamaw’s front porch. Peter tells me he saw gigantic cockroaches under the porch last night though, and the neighbors tell me to watch for alligators in the lake. My enthusiasm for swimming has taken a dip (no pun intended) as a result. Are you noticing a theme here? Creepy crawlers are not my thing. I know, I know, I’m going to have to get used to them where I’m going on this trip, so I might as well start now.

Texans Live Up to Their Name

Texas is known as a place of proud people who aren’t afraid to tell you how it is. So far, this title seems to hold up. I immediately noticed the Texas flag on everything from vehicles to bridges. Texans wear their political, racial, and religious hearts on their sleeves (or their walls, cars, and windows) and they’re eager to share their views. The amount of discussions on religion, race, or politics in a single day here covers what I hear over a month up north. While in the north, I frequently hear, “Anything to keep Trump out of office,” down here I hear the opposite: “Anything to keep Hillary out of office.” Without going any more into sensitive issues, I’ll just say that there is a stark contrast between the two regions. (This could also have more to do with urban vs. rural than north vs. south since we are in a very rural part of Southern Texas.)

Regardless of your political or religious views, one thing is clear: Texans are good people with big hearts who care deeply about their family and their neighbors. They respect the importance of community and show this by not just knowing their neighbors, but calling them friends. They strongly believe in the importance of respecting your elders and always using good manners (Yes ma’am, thank you ma’am, and so forth). They are full of pride for their state and love for their people. If you can make the trip, Texas is a site to see. 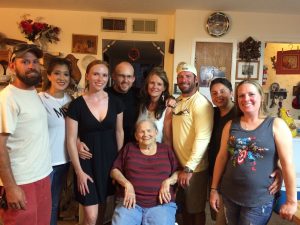 One thought on “Confessions of a “Yankee” in the South”