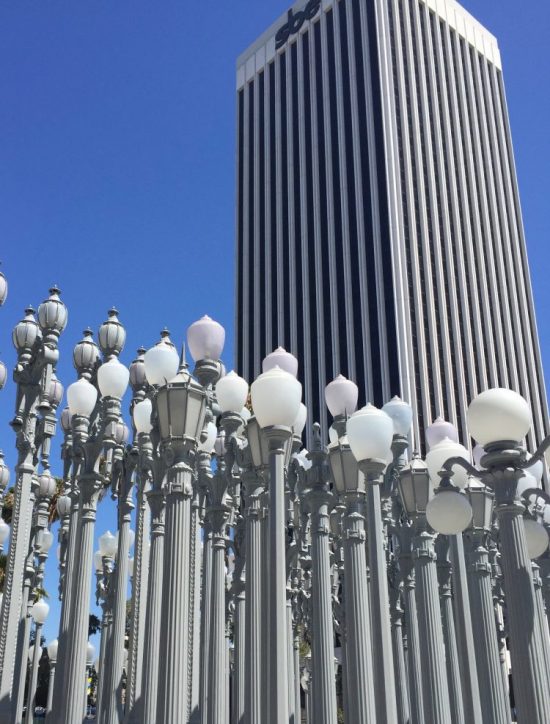 By Emily Landsiedel As someone who grew up in a town with around 35,000 people, there are many things I have admittedly been unaware of or sheltered from. In Helena, MT where it’s common to experience nearly empty streets on a Saturday night, a packed 10-lane freeway more than shocks the system. However, I’m just getting started. Here are some of the things I found entertaining or alarming in my recent visit to some of the biggest cities in the U.S.

Traffic is a Death Trap

Let’s get back to the traffic, because that’s something that took a lot of getting used to. If I’m being honest, I’m a pretty timid driver. I get stressed easily. For example, throughout my teenage years and early twenties, I often couldn’t drive on a highway without the thought, I’m going to die, running through my head, regardless of the fact that I only saw two cars at any given time. I did not know the true meaning of this fear until I got into a major city. As Peter drove us to Cory’s and Thiago’s house in L.A.  (because let’s be honest, of course you couldn’t pay me to drive in a city that huge) I had to practically force myself to meditate in order to not scream or puke from terror: Breathe in through your nose 1-2-3, Breathe out through your mouth 1-2-3. Ignore that bumper Peter just got 5 inches from while slamming on the brakes! Breathe in 1-2-3, breathe out 1-2-3. I’m pretty sure you have to have nerves of steel to survive the LA interstate, and luckily my husband has proven time and again on this trip that he does. I’ve also learned that telling him to brake or “watch out” only directs his stress at me. So I do my best to keep quiet and breath with only the occasional clenching of my teeth, grunting under my breath, or pumping stop with my hands. This has worked out pretty well for us. You know what else has worked well for us? Carpool lanes. I now not only know what these are, but love them. Especially when it takes two hours to get across one metropolis. That’s a lot of adrenaline for one sitting. Despite our initial nauseous panic on major city freeways, we’ve become quite the team this far into the trip. We now feel like pros at navigating the packed 12-lane traffic at 80 mph one second and then 5 mph the next. We can now detect the magically disappearing and then reappearing exit lane that tricks you into thinking you’re ready to exit, but uh oh, another lane just appeared and you’re now in the wrong spot. Quick! Get over! Get over! We’re going to miss it! Yep, we’ve got this. I’m proud to declare I no longer have to do my breathing exercises, most of the time . . .

Parking is a Sacred Gift that Drains the Piggy Bank

While I’m still on my traffic tangent, let me just take a second to acknowledge that city parking is almost as mind boggling. I have to pay fifteen dollars to park at a museum? Seriously? I could enjoy a nice brunch for the same price as my car spending two hours on a square of pavement. To make matters worse, I don’t pay top dollar to just roll in and find a spot. No, in the city you have to stalk pedestrians like a lion with its prey: creep behind them at 2 mph in a dark parking garage just to see if they get into their car. Sounds like the beginning to a horror film, right? Yet it seems to be expected in big cities. As someone who never has to give a second thought to where I’m going to park my car, much less worry about spending more than a quarter on it, I never knew how overjoyed I could be with finding a parking spot that takes a quarter of my daily budget.

City People Are Just Like You and Me, Only Dressed Funkier

Speaking of the people in cities, I’m a bit embarrassed to admit that before visiting, I assumed (like the stereotypes let on), that most city slickers were not to be trusted. I figured I would be in some sort of danger at all times. However, even after my short time in LA, I realized city people are just like anyone else. They aren’t these hardened, aggressive, super humans (although their cars may fool you), most of them are regular people, only multiplied by the millions. Accordingly, every part of town isn’t dangerous. There were parts of LA that seemed as safe as my hometown; I just had to know where those places were. Although they may not all be aggressive and the majority seemed like ordinary people, cities do have their fair share of unique fashionistas. The same outfits that don’t garner a second glance in a city would ostracize me in Small Town, America. To the man I saw in Abbot Kinney, the hipster area of LA: last I checked, two inch thick sandals with sparkly crew socks is the opposite of cool. (Wait. . . isn’t doing the opposite of what’s cool the true definition of Hipster-ness? Oh, I get it now.) Regardless, my sister says the outlandish outfits that were popular in Japan a few years ago are moving to LA. Maybe Montana will see them in 10 years. I also can’t stop thinking about the girl that had sunshades sitting behind the glasses on her face. You know, like the kind you wear after your eyes are dilated, only separated and more bourgeois. I acknowledge this fashion statement would be very convenient for those of us who have to wear glasses but need to be shielded from the sun. Sadly, this fad won’t be available for anyone living in a small town until after it’s no longer in style.

The Miracle of Grocery Cart Escalators

Now, to top off these open confessions of my small town ignorance, I want to take a moment to marvel at the grocery cart escalator I witnessed. My sister had a good laugh at my childlike amazement with this contraption. When I saw one for the first time, I asked Cory what it was. When she explained it was for people to put their carts in to take their groceries down flights of stairs, my first question was, “How do they do that without all the food dumping out?” She graciously let me try one out on our way back to the parking garage even though we didn’t need to use a cart. I was fascinated to see the cart staying upright instead of tilting forward as it rode alongside us down the escalator. I can only hope that at least one small town person appreciates the amazement in this in order to make my embarrassing confession worth it.

There are a lot of things a person has to sacrifice to move to a big city like personal space, free parking, and relative safety in a vehicle, yet there are definitely perks they get in exchange. It’s pretty awesome that I can sample cuisines from all over the world in a single day. For example, I can have a French breakfast, Brazilian lunch, and an Ethiopian dinner if I feel like it. If I’m bored, I can find free art museums, music shows, street performers and more. If I want to make an ethnic dish, I can find a grocery store dedicated solely to that country’s cuisine. Options are abundant with everything! Despite all this, I don’t plan to leave my Montana home permanently anytime soon. However, that doesn’t mean I can’t have fun enjoying the culture shock while I visit.