So. We’re off on a 9ish month world adventure. We’re leaving our careers, our families, our dog, and our home to live as vagabonds for the better part of a year. Many of you are likely wondering, why? Why would we give all that up and blow tens of thousands of dollars to travel? Can’t you just travel when you’re older? Can’t you do a couple smaller trips instead of one big one? Sure. We could wait until we’re older, and we could do a few trips here and there and stretch it out, and save our money now. But I would argue that the risk in waiting is greater than the risks of going now.

We have a lot of things going for us right now, but just as importantly, we don’t have a lot going on right now. We don’t have kids. We don’t have a mortgage. We want to have kids and own a home in the future, and we know that either of those endeavors will preclude our dreams of traveling the world. There is risk in “waiting until we’re older.” Frankly, we don’t *know* that there will be a “when we’re older.” Life is short and unpredictable. One, or both of us, could die young. Or we could suffer from a debilitating illness. Or I could need my gallbladder removed again (just kidding, they got the whole thing I’m told). I’d rather undertake some known risks now (e.g., interrupting my career as an attorney), than undertake the unknown risks associated with traveling “when we’re older.” A lot of what I do for my criminal defense clients is risk management. They hire me to defend their rights, sure, but they also hire me to give them no bullshit advice and let them know what the least risky course of action is. Applying this kind of thinking, Emily and I are taking a pretty big risk in interrupting our lives for an extended trip around the world. But, we believe that the risk of not leading the lives we want to lead is more risky. What we lose in money and career advancement opportunities, we gain in experience and the knowledge that we lived a life of adventure.

Even if that makes sense, many of you still likely think we’re crazy. Or rash. Or foolish. We probably are a little bit. If you’ve ever been bitten by the travel bug, you’ll probably understand our desires more than those not afflicted with the infectious urge to travel. Emily and I both were bitten long ago. I got the bite in high school studying German. Emily got the bite when she came to visit me living in Berlin in early 2008. We started kicking around the idea of a long term round-the-world trip back in August of 2015. I’ll admit, watching the documentary “Point and Shoot” had some influence on my desire to travel more extensively. (To be clear though, just the first part of the film. Not the part where the protagonist joins the Libyan Revolution. We won’t be doing that.) Emily had wanted to take an international trip as part of of our honeymoon but because of timing and jobs and money, we hadn’t done so. I promised her that we’d make an international trip within a few years. By August 2015, I had been practicing law for about 10 months and I still was not used to sitting at a desk for 8 or so hours a day. The itch to travel hit me hard. I wanted to explore. I wanted an adventure. I took a philosophy class in undergrad on the writings of Emerson and Thoreau. Two quotes from “Walden” stuck with me:

“The mass of men lead lives of quiet desperation. What is called resignation is confirmed desperation.”

“I went to the woods because I wished to live deliberately, to front only the essential facts of life, and see if I could not learn what it had to teach, and not, when I came to die, discover that I had not lived. I did not wish to live what was not life, living is so dear; nor did I wish to practise resignation, unless it was quite necessary. I wanted to live deep and suck out all the marrow of life, to live so sturdily and Spartan-like as to put to rout all that was not life…”

I felt quietly desperate at my desk job. Resigned to the fact that I was now officially part of the work force that’s chained to a desk. Don’t get me wrong, I love what I do. Nothing is more satisfying to me than standing up for the rights of the accused. But for now, I wanted something else. I did not feel as though I was living a deliberate life. The law will always be there. The opportunity to travel extensively will not.

So one afternoon, we sat down with a NatGeo world map and listed out all the places we wanted to see before we died. I grabbed a box of Hornady .30 cal bullets and we placed a 150 grain lead round nose bullet on each place we wanted to see. 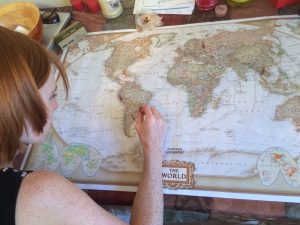 At the end of it, we had a long list of countries, and an unbridled excitement to get out of Montana. We spent a long time discussing the logistics and possibilities of a world tour. Emily read blogs, listened to podcasts, and researched for hours. I rewatched “Point and Shoot.” Eventually, we worked out the kinks (kind of), decided to go for it, and started saving. We’ve spent months planning and saving, planning and saving. This blog will be a public record of our experiences, our plans, our photos, travel advice and best practices, and reviews of places, gear, and travel services. We’re incredibly excited to get underway, and incredibly grateful to our family and friends for their support (even if it’s reluctant support, Kaiser Leib.) We want this to be an interactive project, so please comment, leave questions, and share this site with anyone you think would be interested.